Nature is a perfect integral system that functions according to laws of interconnection and interdependence, and there is no shred of cruelty in nature.

However, it appears to many that nature is cruel. Why?

It is because, as is written in the wisdom of Kabbalah, “the judge judges according to his own flaws.” In other words, since we humans have an aspect of cruelty in our egoistic nature, where we can enjoy at the expense of others and nature, then we attribute this cruelty to nature, and then perceive its actions as cruel. 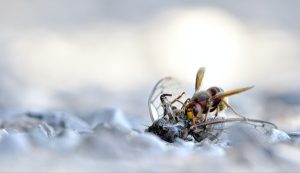 If we studied nature in depth, learning how and why it functions the way it does, then we would find no shred of cruelty in nature. Instead, we would discover how nature is ultimately a single thought that wishes only to bestow contentment, pleasure and fulfillment upon its creation. In other words, at its source, nature is a pure intention to love and bestow, which has no wicked intentions whatsoever.

Nature created a single system that functions according to laws of interdependence and interconnectedness. We see how the still, vegetative and animate levels of nature behave in a way where each element takes only what it needs for its sustenance, and fulfills its role for the sake of the ecosystem’s sustenance. Although we see several animals killing and eating each other, they do so not out of cruelty, but simply because it is the way they were created. By doing so, they fulfill their role in nature, and the whole that they are parts of continues its sustenance through their instinctive behavior.

If we humans would receive only according to our needs, and gave everything else for the benefit of humanity and nature, then we would be on the same level as animals. However, we clearly see that we operate differently, and that there is a program embedded in us that makes us want to personally benefit at the expense of other people and nature.

This egoistic element—the desire for self-benefit at the expense of others and nature—is what differentiates humans from animals and the rest of nature, and it is solely this quality is cruel. In other words, human egoism is the sole aspect within nature that opposes nature, and likewise, it is the one quality that needs to become corrected.

The increasingly cruel world we perceive is in order to bring us to a point where we will truly want to invert our egoistic nature into its opposite altruistic form. For a change of such magnitude to happen, we need to learn how and why nature acts as an integral system, to learn its laws of interconnection and interdependence, and apply them to ourselves in order to reach balance with nature. By doing so, we will discover a new harmonious and complete life, completely outside the scope of how we currently perceive and sense our world.